Solar power could be the green energy solution for Congo

The Loudima family in Congo have long been without electricity but they have found an environmental solution: solar power. In the remote districts of Pointe Noire, the Congolese start-up Hélios Électricité has installed a solar power plant. “I am very happy to have the solar panels, I installed 10 solar panels, It powers my 52-inch plasma television, two freezers, and even a two-horsepower air conditioner,” the father of the family told Africanews. According to the World Bank, nearly half of the Congolese population does not have access to electricity.

Cheaper bills and a greener future

Congo is one of the top five oil producers in Sub-Saharan Africa. But despite its rich energy resources, the electrification rate is low, especially in rural areas, mainly because of a lack of electricity infrastructure. But solar power could be the future as it is also said to be cheaper for households.

“What we did for our client, Mr. Loudima, is a solar power plant of the 3000-megawatt peak which is composed of 10 solar modules of 300 watts each and a 3 KVA inverter, this system falls within the scope of what we want to do for our customers, namely to provide them with autonomy in electricity,” said Laslande Moutoundou; Head of Study and Development Helios Electricity.

In addition to being a decarbonized energy solution transmitted directly by the sun, it is also said to be cheaper. “With a solar installation you will save more money, compared to for example a generator or compared to an electricity bill,” said Melki Valenti Tchicaya, an installation and maintenance manager at Helios Electricity. “You are self-sufficient, which means you don’t need to pay any charges for a monthly electric bill, and maintenance is cheaper. “The advantage of a solar installation is that the source is renewable energy and that will allow you to always be provided with electricity because there is no blackout. ”

Solar power could be the miracle solution to trigger the energy transition, pumping freshwater, and supplying low-income households with basic needs. But the panels cost a small fortune, ranging between 500 and 6,000 euros.

Solar power has proven to be the solution needed by flower farmers in Kenya to support their energy-intensive businesses. These… 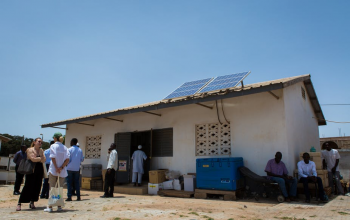 There’s hope that some industrialized countries will achieve near-universal vaccination against COVID-19 in the coming months. Yet the effort to…