Farming is a tough business where success depends on a range of factors, including the weather. Hard frosts and flooding can be particularly damaging to those who grow crops and rear livestock, while severe droughts also have the capacity to wreak havoc. One country that’s been hit hard by drought is Zimbabwe, in southern Africa. The most recent Global Report on Food Crises (GRFC), released in April, described the landlocked country as having experienced “its worst drought in decades” in 2019.  This drought, combined with other “weather extremes” and factors including serious economic difficulties, has had a devastating impact.

“Widespread poverty, high levels of HIV/AIDS and low crop productivity also undermine food security,” the GRFC report, citing the World Food Programme, said. Referencing the Famine Early Warning Systems Network and United Nations, the report went on to describe Zimbabwe as “experiencing one of its worst acute food insecurity crises in a decade, with atypically high humanitarian food assistance needs.” Zimbabwe’s problems are serious and systemic. At a local level, the development and introduction of efficient techniques could have a role to play. “I look at water as if it’s my god, because all my life is centered around it,” Handsome Fundu, a farmer who grows tomatoes to sell at market as well as crops like butternut for his family, told CNBC’s Sustainable Energy.

Fundu has employed a technique that uses “dead level contours” to harvest rainwater. In simple terms, a dead level contour is a flat channel dug into the earth which can be used to store water.  “I started digging the contours in 2000 but I didn’t know about … dead level contours, I just dug to get water,” Fundu explained. “I learned new water harvesting methods when I started working with the Muonde Trust.”

Daniel Ndlovu is a researcher at the trust, a “community-based organization” that traces its roots back to the 1980s. “Our work is to go around communities preaching the word of harvesting water,” he told CNBC. For other farmers, such as Cheneso Ndlovu, the energy produced by solar panels has proved to be a useful tool. “We do gardening using a solar-powered borehole for watering,” she said.

“We planted tomatoes on a small patch we were watering and we realized it was thriving, so we decided to grow other vegetables,” she added. “We use the water for other domestic needs like washing.” Cheneso Ndlovu is not the only person to have benefited from the solar-powered system. “I also let some elderly people take some water from here because it was getting too crowded at the communal borehole and I feel pity for them,” she said.

Why the countryside is so important

While the work being carried out by the Muonde Trust is based in Africa, harnessing and cultivating nature is important around the world. At a site in Brittany, France, Yann Laurans, biodiversity and ecosystems programme director at the Institute for Sustainable Development and International Relations, sought to reinforce how the countryside could have an impact on people’s lives and the environment.

“Of course, there are the benefits of … healthy, pleasant quality of life in general,” he said. “But also, the fact that keeping the countryside alive with (a) renewed farming system means that we are going to reuse resources that were forgotten in the past,” he added. Even minor developments can play an important role when it comes to maintaining biodiversity. Referring to a nearby pond, for instance, Laurans described it as “a small wetland.”

“This water will provide, of course, water, but also it is going to host a lot of insects, frogs,” he continued. Laurans also emphasized how such elements could result in “a more productive farming system without any need of pesticides and synthetic fertilizers.” 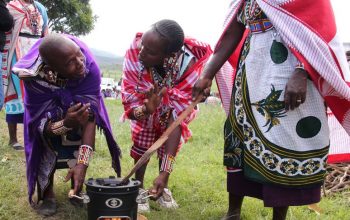